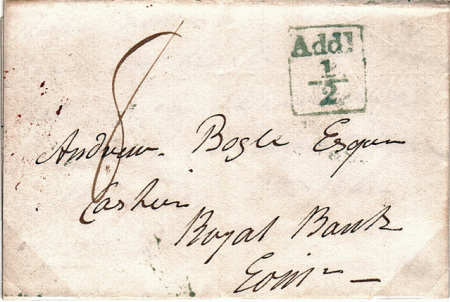 An example of the third Berwick Additional Half.

This particular mark is known in black and in green.

One of the interesting aspects of collecting the Postal History of Berwick-upon-Tweed lies in the use of Additional Half marks, which were introduced in 1813. The act of Parliament in 1813 was designed “… to repeal the exemption from Toll granted in respect of carriages with more than two wheels carrying the mail in Scotland…”  The idea behind the charge was that the loss of revenue from the payment of tolls would be recouped, to at least some degree, by the levying of a sum of one halfpenny per letter on mail carried across the border by a mail coach with more than two wheels.

½ unboxed; and ½ boxed though within those styles there are a number of varieties of mark.

It should be noted that an exception was made for certain towns close to the border. An instruction in the order book of the President of the Inland Office on 8 June 1813 read:

“ all letters for Scotland except for the following towns Coldstream, Kelso, Jedburgh, Hawick, Melrose, Galashiels, Greenlaw, Dunse, Lauder, Earlstone and Boswell Green, are to be charged with one single halfpenny in addition to the rates to which they are now liable, and letters coming from Scotland on and from tomorrow morning are to be charged in like manner. It must be understood that a package weighing one pound is only to have the additional charge of halfpenny not four halfpennies.”

This is slightly different to the instruction sent to postmasters dated 10 June 1813 which states:

“ Coldstream, Kelso, Jedburgh, Hawick, Melrose, Gallashiels, Earlstone, and St Boswells Green are the only towns in Scotland where letters to and from England are exempt from the additional halfpenny tax…” Here, there are only eight towns with the three most northerly towns in the original list, namely Dunse, Lauder and Greenlaw, being omitted.

A further notice to this effect, again listing these eight towns, was sent out by Francis Feeling dated 10th August 1813, a copy of which follows: 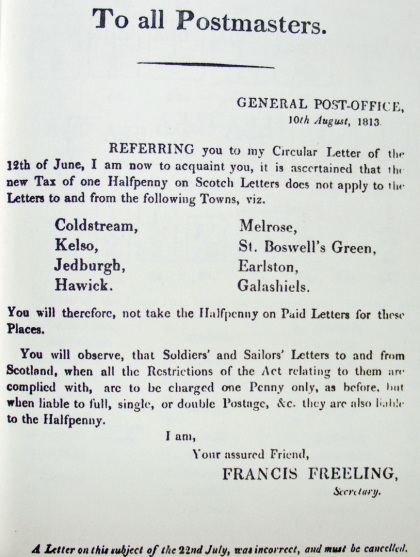 The following is an illustrated list of the Additional Half marks from Berwick.

The first Berwick Additional Half mark.

The second Berwick Additional Half mark.

The third Berwick Additional Half mark.

The fourth Berwick Additional Half mark.

The fifth Berwick Additional Half mark.