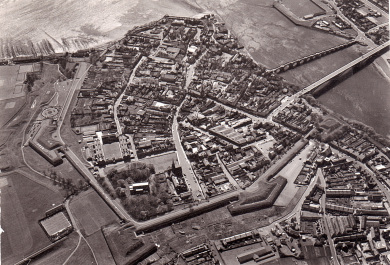 View of Berwick taken from the North West.

The Postal History of Berwick-upon-Tweed.

Situated on the Great North Road between the capital cities of London and Edinburgh, Berwick was one of the main links for mail being carried between Scotland and England.

Initially, from the establishment of the Letter Office in 1635, mail in England was sent to London and from there out to its destination. Following the introduction of mail coaches and the establishment of various ‘cross-post’ routes certain towns became Forward Offices for mail coach, and later railway, connections. The two border towns of Berwick and Carlisle were the English Forward Offices for mail destined to cross the border. Some rural town and village cancellations, like the one below, included a letter indicating the Forward Office through which their mail would be routed. In the example that follows the letter B indicates Berwick as the forwarding office.

It is worth noting that The British County Catalogue of Postal History (Vol. 5) by Willcocks and Jay records the earliest known Northumbrian town mark as the 1709 mark of Belford. However, the recent discovery of a 1706 mark of Barwick (the old name for Berwick) makes this the earliest known Northumbrian mark, predating the previous earliest Berwick mark by 10 years. The town we now know of as Berwick was spelt Barwick until the spelling became standardised as Berwick in around 1725.

The County Catalogue also states that Berwick-upon-Tweed had two Post Offices, a Scottish one and an English one. I suspect that this belief stemmed from the fact that items of mail from Berwick can be found with either a Scottish-style or an English-style of hand-stamp, examples of which are shown below: