Instructional and Other Marks

There are three types of Missent marks used in Berwick.

The first of these is a three line, boxed, MISSENT/TO/BERWICK measuring 30mm x 14mm. This is the scarcest mark of the three. Known only in black it was used between 1813 to 1815. 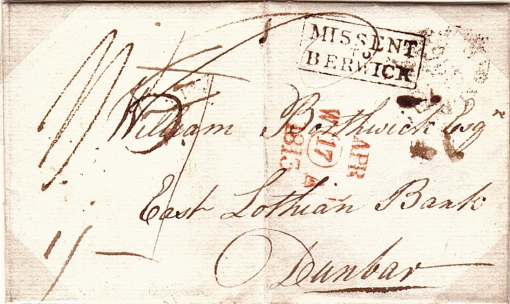 1813. This is the first Berwick missent mark.

The second mark is a two line, boxed, MISSENT.TO / BERWICK. Measuring 39mm x 19mm it was previously only recorded in black but I also have an example in green. It was used between 1813 and 1832.

The third and final mark is a two line, unboxed, MISSENT/TO BERWICK. This hand-stamp measures 40mm x 10mm and is known in black, blue and green.

There is only one 1d mark recorded for Berwick. Wilcox and Jay in the British County Catalogue of Postal History volume 5 state that this mark is known only in red, but the three examples that I have seen are black.

The Berwick ‘Too Late’ mark is known used between 1819 and 1852. The words are within a rectangle with chamfered corners measuring 49mm x 13mm. Previously known in both green and black I also have one in blue. 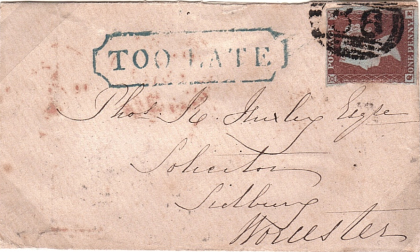 This mark measures 44mm x 11mm and is found in various shades of blue-green.

Previously known used from 1832-1837 the example I show below is dated 1827, some five years earlier than previously recorded. 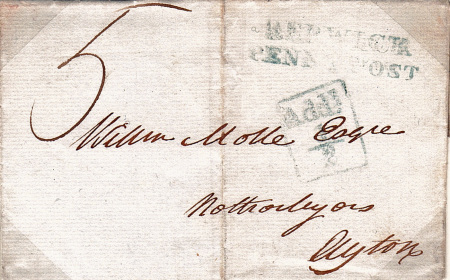 The example below was posted in Wien (Vienna) addressed to Broadmeadows, Berwick on Tweed.

The cover has a manuscript charge of 2/3 , this being the charge to Berwick. The letter then had to be sent on to Broadmeadown, 6 miles from Berwick, so the Berwick Penny Post mark was added for this part of the journey, bringing the total to be paid to 2/4, recorded in the top left of the cover. 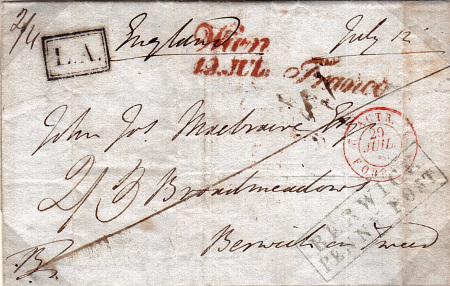