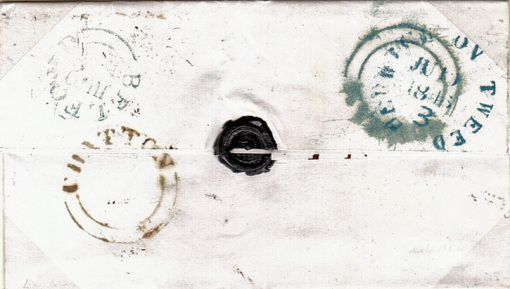 A ‘Skeleton’ or ‘Travelling’ hand-stamp is basically a dated hand-stamp made up from loose type. Sets of type that could be made up into these temporary hand-stamps were held in Post Offices and put into use when, for one reason or another, the normal hand-stamp was unavailable, usually through loss or damage.

The British County Catalogue of Postal History Volume 5 by Willcocks and Jay states that the first recorded use of a ‘Skeleton’ hand-stamp in Berwick was in 1846. This one has the number 3 below the date in the stamp.

This one, from 1847, has the number 1 below the date. It is not recorded by Willcocks and Jay. It is noticeable that the town name is simply stated to be Berwick rather than Berwick on Tweed as had been the case in the earlier example.

The next recorded use of a ‘skeleton’ dates from 1901: an example is shown below. This stamp was used between 19 November 1900 and 26 January 1901, which is an unusually long period for a ‘skeleton’ to be used.

The fourth and most commonly found ‘skeleton’ dates from September 1905. As Berwick was a popular seaside town and 1905 was during the golden age of postcards, there are a substantial number of examples of this skeleton being in existence today.

This ‘skeleton’ was in use from 6th - 25th September 1905.The slugs for the date and time had to be inserted at each change. They had to be put in so as to give a mirror image of what was to be printed. This being the case the slugs can often be found printed the wrong way round. For example, in the picture above, the time slug B has been inserted the wrong way round. The chart below shows the dates and times that I have found. 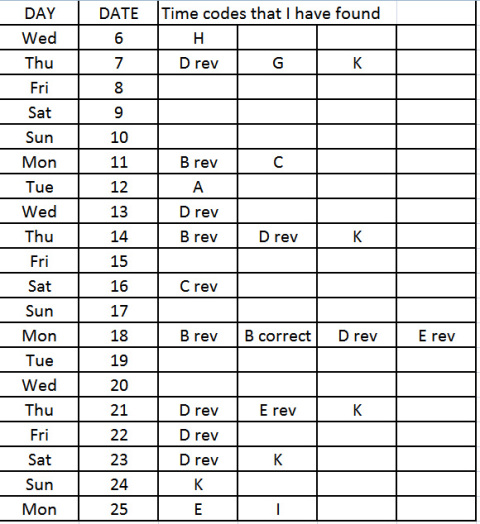 Probably the most interesting one of these is that of Monday 18th September. On that date I have a postcard that has a cancellation with the time code B reversed. At some time during that two-hour interval relating to that time code the postal clerk must have noticed that the letter B was reversed, removed that slug and replaced it the right way round, as I also have a card on that same day but this time with the time code slug B correctly aligned.