The Railway at Berwick 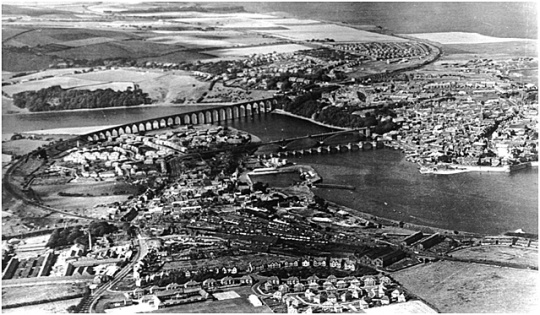 This aerial picture shows the railway line sweeping down the Scottish coast from the top of the picture to Berwick station, situated on the north bank of the river.

The Royal Border Bridge then carries the railway line across the river to Tweedmouth and then on to the South.

The Railway at Berwick-upon-Tweed

The development of the railways in the 1800s had a tremendous impact on the movement of mail. Suddenly it was possible to mail a document in London and for it to arrive in Edinburgh on the same day. The rail network expanded quickly, both north and south of the border but the rail link between Edinburgh and London was not possible until the construction of a bridge at Berwick-upon-Tweed. The Royal Border Bridge across the River Tweed was the final link in the creation of a truly national rail network.

The Newcastle and Berwick Railway Company was formed in 1845 to construct the line through Northumberland. In 1847 it was combined into a new company, the York, Newcastle and Berwick Railway Company. This company was formed to complete the East Coast line by building a railway bridge over the River Tweed to link Berwick on the north bank with Tweedmouth on the southern bank. Robert Stevenson was employed by the company to lead the project. Construction commenced in 1846 and the bridge, aptly named The Royal Border Bridge was opened by Queen Victoria in 1850. The bridge had cost a total of £253,000 to build.

Increases in the volume of mail being carried, coupled with the importance of the railway, led to the post office leasing an office for their own use in Berwick Station from 1853. New hand-stamps were needed to deal with the mail in the new station office and below are some examples of Berwick Station cancels.

Used as a receiving mark it is normally found in black on the reverse of the envelope.

The second Berwick Station mark is also a double arc circular date stamp, but this one has a diameter of 22mm: smaller than the first mark that measured 25mm.

Again, it was mainly used as a receiving mark on the back of the envelope. 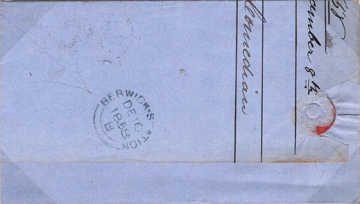 In 1859 a new handstamp came into use. This was a single circle date stamp and is the most common of all the Berwick Station marks.

It can be found with no time code at all, or with time code A or B.

It is recorded in the proof book in April 1863 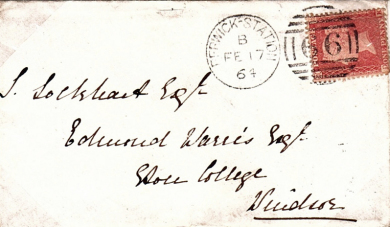 This mark is most commonly found with no time code at all, or with time code A or B,

Code A being the least common of all.

Below are two marks that include Berwick in the title of the T.P.O.

This cancel measures 25mm circumference and is only recorded in black.

The Berwick and Newcastle sorting tender only existed for a short period from June to September 1888. Following a contract dispute between the Post Office and the North British Railway Company, the T.P.O. service between Edinburgh and Berwick was discontinued from 1st June 1888. A new contract was eventually agreed with the service being resumed on 1st October 1888.

The North British Railway Company were responsible for the rail north of Berwick, so it is likely that this service replaced the existing Edinburgh and Newcastle service, which accounts for all known covers with this mark being from the period June – September 1888.

The letter D indicates that this is is the day mail cancel, and Wilson* states that just five examples are recorded.